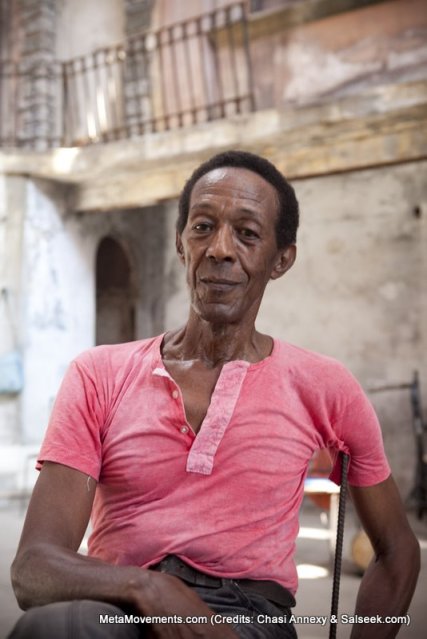 Juan De Dios began his artistic life at a very young age–by his recollection in 1945.  In 1955, his career path starts to be documented, when he joins Conjunto Musical Gavilan.  Between 1956 and 1962, he performed with a variety of groups including Conjunto Primavera, Conjunto de Gales and Grupo Sicamirie to name a few.

His status as a professional artist was made official in 1959, when he had to perform 42 shows to be evaluated at the National Syndicate of Performing Artists (SINTAE), under Alberto Alonso and Sonia Calero. He passed, and was officially approved as a rumba soloist performer in the areas of dance, vocals and percussion. He performed in many public venues, including Cabaret “El Nicho”, La Taberna De Pedro, Pompilia, El Chori, El Pensilvania, Isora Club, El Club De Los Munequitos, Ali Bar, El Nacional De Prado, Moroco, Club, Via Blanca, and Teatro Marti.

In 1962, the Cuban National Council of Culture (CNC) opened the invitations to create Cuba’s National Folkloric Ensemble (Conjunto Folclorico Nacional), to represent the country as the best of this genre (like the National Ballet does). Juan participated in the auditions and passed all tests made by the evaluation board. From that moment he was named one of the  “founding members” of the Ensemble, where he would play the roles of principal dancer, professor, vocalist, percussionist and choreographer.

A list of some of the countries he toured and important festivals he participated in can be found at the end of this biography.

He earned his university degree through the National Council of Culture and the University of Havana, and he continues his reading and investigative studies even today.

In 1975 he founded his own folkloric performing ensemble named “Conjunto Folclorico Raices Profundas”, which he continues to direct to the present day.  (You can read more about Raices Profundas’ history on their About page)

Juan’s tireless energy and talents as a teacher and director coupled with his profound knowledge of Cuban cultural traditions led the group to notoriety and acclaim as one of the most authentic performing ensembles conveying Cuban identity through artistic expression. Juan is the recipient of a vast array of awards of recognition and artistic achievement. He highly revered as a pedagogue and is a major influence in conserving and maintaining Cuban cultural traditions.